40 PODCASTS YOU HAVE TO LISTEN TO

My name is Chris Maguire and I’m addicted to podcasts.

I spend so much time in my car I’m always listening to podcasts or the latest book on Audible.

However, with more than 700,000 active podcasts to choose from, how do you pick the winners from the fields of also-rans?

With this in mind I’ve come up with my list of 40 favourite podcasts – but first, an explanation.

Equally I haven’t included podcasts that are not currently available or BusinessCloud’s excellent Demystifying Tech podcast because I could be accused of having a vested interest.

I hope you enjoy my recommendations and I’d welcome your feedback at chris.maguire@businesscloud.co.uk or @editor_maguire on Twitter.

The list is not in any particular order but my favourite three are The Dropout, The Missing Cryptoqueen and The Sun King.

I’ve broken it down into different genres. I make no apology for the number of true crime podcasts, which I put down to the fact I wanted to be a detective if journalism hadn’t worked out.

The Price of Football
This is a brilliant podcast with the University of Liverpool’s football finance expert Kieran Maguire (no relation!) and comedian Kevin Day, which shines a light on football finances. It’s produced by Guy Kilty.

Wake Up To Money
If you’re not up at 5.15am to listen to the show the podcast is a perfect taster from the world of business and personal finance. Hosted by Sean Farrington (and others) I always enjoy listening to Mickey Clark, who has been around since I was a kid!

Masters of Scale
The podcast is hosted by Reid Hoffman, co-founder of LinkedIn, and shows how companies grow, testing his theories with legendary leaders. It’s American so brace yourself for the adverts.

They Walk Among Us
Benjamin and Rosanna Fitton are the husband and wife team behind the UK crime podcast. It delves into the crimes that are close to home, hence the name.

Casefile
Casefile is an Australian-made show which has attracted a huge worldwide audience. It’s hosted by an Australian man who remains anonymous – which adds to the mystery. A lot of the crimes are Australian but they also feature occasional UK crimes.

Dirty John
Debra Newell is a successful interior designer who is looking for love when she meets handsome doctor John Meehan. He seems perfect but there’s no happy ending. Very pacey podcast hosted by the brilliant Christopher Goffard, of the LA Times.

In The Dark
Investigative journalism at its best. Season 1 looks at the kidnapping and murder of 11-year-old Jacob Wetterling and season 2 explores the case of Curtis Flowers, who has been tried six times for murder.

Believed
Compelling but disturbing podcast series recounts the horrific story of disgraced former US Olympic gymnastics doctor Larry Nassar, who abused hundreds of girls and will spend the rest of his life in jail.

West Cork
Available on Audible, West Cork focuses on the murder of French woman Sophie Toscan du Plantier, outside her holiday home near Cork. Her murder has been at the centre of several court actions involving suspect Ian Bailey, who has protested his innocence for more than 20 years. London-based couple Sam Bungey and Jennifer Forde have produced a masterpiece.

Empire on Blood
Calvin Buari was convicted of killing two brothers in a turf war in New York’s Bronx neighbourhood. Then journalist Steve Fishman got involved and the result is his podcast Empire on Blood, which he narrates.

Ponzi Supernova
Steve Fishman’s investigation into the disgraced Wall Street financier Bernie Madoff, who was jailed for 150 years after his $65 billion dollar Ponzi scheme collapsed is not as good as Empire on Blood but it’s thought-provoking.

Over My Dead Body
I love true crime and Over My Dead Body is addictive listening. I’ve only listened to the first season, which focuses on the murder of Dan Marke, but a second season was launched in 2019 and is set around the story of a man called Joe Exotic.

UNTOLD The Daniel Morgan Murder
In 1987 private investigator Daniel Morgan was brutally murdered in a pub car park in south London after claiming to have uncovered evidence of police corruption. This podcast is presented by the screenwriter and author Peter Jukes and is made in collaboration with Morgan’s brother Alastair. Season 1 is excellent although season 2 doesn’t take the story much further.

The Teacher’s Pet
The Teacher’s Pet is a podcast produced by The Australian and is an investigation into the disappearance of Lynette Dawson. She was the wife of rugby league player and teacher Chris Dawson and disappeared without a trace in 1982. A long listen but riveting nonetheless.

Dr Death
Dr Death is a fast-paced podcast by Laura Beil which tells the story of Texas surgeon Christopher Duntsch, who was convicted of gross malpractice after 31 of his patients were left seriously injured after he operated on them.

The Doorstep Murder
The murder of banker Alistair Wilson remains one of Scotland’s most baffling unsolved cases and is the subject of a six-part podcast series presented by Fiona Walker.

The Hurricane Tape
s Rubin Carter was a middleweight boxer and convicted triple murderer. His case got picked up by a number of celebrities as he and his co-accused John Artis spent two decades in prison maintaining their innocence.

Dead Man Talking
Angel Resendiz aka The Railroad Killer criss-crossed the US by freight train in the 80s and 90s, choosing his victims at random. Before his death Resendiz spoke to journalist Alex Hannaford and claimed to have killed more people. Hannaford made a podcast out of the tape.

How to Fail with Elizabeth Day
Really good podcast that looks at how high profile people have dealt with the things that haven’t gone right. Nice thing about Day is she always acknowledges you on Twitter!

Reasons to be Cheerful with Ed Milliband and Geoff Lloyd
The beauty of podcasts is it can change your perception of someone and Reasons to be Cheerful is the perfect example. Former Labour leader Ed Milliband, who famously said in the 2015 General Election “Am I tough enough? Hell, yes, I’m tough enough,” chews the fat with Geoff Lloyd and comes across as a really nice bloke.

Desert Island Discs
BBC Radio 4’s long-running show Desert Island Discs was first broadcast in 1942 and involves a guest being ‘cast away’ on a desert island but not before they’ve identified their favourite eight songs. More than 3,000 episodes. I prefer the ones with people I know like actor Stephen Graham rather than the obscure ones. Hosted by Lauren Laverne.

Podcast Radio Hour
Presenters recommend their favourite podcasts and hear from the people who make them. The BBC Radio 4 Extra podcast is hosted by Amanda Litherland and is a bit like Top of the Pops for podcasts.

BBC Outlook
This podcast is on BBC World Service and unearths interesting and varied stories from around the world.

The Peter Crouch Podcast
One of BBC Radio 5 Live’s most popular shows That Peter Crouch Podcast gives listeners an insight into the life of a top-flight footballer with BBC Radio One’s Chris Stark (resident Watford fan) and Tom Fordyce, the BBC’s chief sports writer. It will be interesting to see if dynamic changes now that Crouch is a former footballer.

You, Me and the Big C
Not sure ‘entertainment’ is the right category for this podcast. It puts the ‘can’ into cancer but that’s what makes You, Me and the Big C work. The original hosts were cancer patients Deborah James, Lauren Mahon and Rachael Bland. The latter’s death in 2018 saw her husband Steve take up the cudgels and he’s done an excellent job.

Profile
Love this short little weekly podcast by BBC Radio 4 on people behind the news, mainly because of the excellent host Mark Coles.

The Missing Cryptoqueen
Available on BBC Sounds this wins the award for my favourite podcast in 2019. Dr Ruja Ignatova persuaded millions to join her financial revolution OneCoin and then disappeared. The excellent Jamie Bartlett presents. 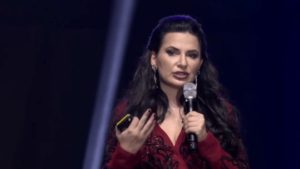 Embedded
Hosted by the impressive Kelly McEvers, Embedded ‘takes a story from the news and goes deep’. The podcasts on Donald Trump’s administration were brilliant.

The Tip Off
The Tip Off podcast takes you behind some of the best investigative journalism from recent years. Web of Death was brilliant. It started with the death of property tycoon Scot Young and looked at the mysterious deaths of 14 other men who had links to Russia. The episode on the Panama Papers is also excellent. Hosted by investigative journalist Maeve McClenaghan.

Caliphate
Caliphate follows Rukmini Callimachi on her mission quest to understand ISIS. It’s a difficult listen but provides a unique insight into ISIS.

Slow Burn
Leon Neyfakh’s shines a spotlight on Watergate in Season 1 and Bill Clinton’s impeachment in Season 2. The podcast is called Slow Burn for a reason but it’s worth sticking with is you’re interested in US political history. The third season looks at the murders of Tupac Shakur and the Notorious B.I.G. but I’ve not listened to it yet.

The Dropout
Superb account of the rise and fall of self-made billionaire Elizabeth Holmes and her business Theranos. The podcast follows a three-year investigation and is hosted by ABC News’ Rebecca Jarvis.

The Tech Tent
There are plenty of tech podcasts out there but I always find BBC World Service’s Tech Tent with Rory Cellan-Jones an easy listen.

Capital
Capital is an improvised comedy about a referendum that brings back capital punishment with a 51 per cent majority. Sounds far-fetched until you remember Brexit. Some funny moments.

Pienaar’s Politics
Politics show on BBC Radio 5 Live with John Pienaar. He’s well connected and has the ability to cut through the rhetoric and explain things in a language people can understand. Special mention also for the brilliant Brexitcast podcast on BBC Radio 5 Live.