Why entrepreneurs can never retire

Following the death of Arthur Ryan, Chris Maguire looks at the individuals who refuse to put an age limit on entrepreneurship. 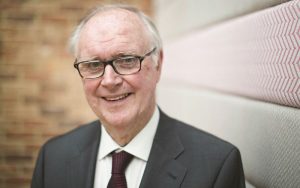 Arthur Ryan is the best-known entrepreneur most people outside the retail sector will never have heard of.

He died in July 2019 at the age of 83 and is the founder of the discount fashion giant Primark.

He had a simple approach to business. “No gimmicks,” he said. “You like it or you don’t. We don’t have annual sales because we don’t hang around waiting for January if we have a problem in October.”

Ryan flew in the face of the belief that modern retailers had to sell online. In a numbers industry, Ryan’s numbers stood up to the most intense scrutiny with circa 370 stores in 12 countries and employing 75,000 people.

When Ryan stood down as CEO in 2009 after four decades in charge he became chairman but his work ethic and entrepreneurial zeal remained undimmed.

He would regularly make unannounced visits to stores and his successor as CEO Paul Marchant said: “His legacy will continue in the business that he founded and built.”

I never had the good fortune of meeting Ryan but he’s proof-positive that entrepreneurs can never completely retire.

I’ve interviewed Betfred’s co-founder Fred Done and his passion and enthusiasm for business is infectious.

The 76-year-old is up at the crack of dawn, is as fit as a fiddle and sharp as a tack.

Done has invested heavily in tech and property, the latter through the developer arm of his business empire Salboy.

Leaders at the top of their game like Ryan, Done and former Manchester United manager Sir Alex Ferguson are judged on the legacies they create rather than the fortunes they may make. Money alone can’t create legacies.

Researchers at Oregon State University found that entrepreneurs who retired later tended to live longer than their counterparts who retired earlier.

It’s a simplistic argument but the inference was that there’s a health benefit for people who remain active and engaged.

What’s obvious is that age is no barrier to being an entrepreneur. Charles Flint was 61 when he founded IBM!

I once spent an hour in the company of John Whittaker, who is the chairman of Peel Group and is behind the Trafford Centre and MediaCityUK.

Now 77, he convinced the BBC to move to MediaCityUK, which acted as a magnet for other companies to take space. Speaking to Whittaker reminded me of that adage that there’s no substitute for experience.

According to the Kauffman Index of Entrepreneurship, the number of burgeoning entrepreneurs aged between 55 and 64 increased from 15 per cent to 24 per cent between 1997 and 2016.

Recently I’ve interviewed two entrepreneurs who tried retiring but realised immediately it wasn’t for them.

Lorna Davidson sold her first business Tactical Solutions for several million pounds but realised within four hours that she wasn’t ready to retire in her 40s.

Instead she launched The Mothership Group, in Liverpool, which operates a portfolio of companies including her pride and joy, RedWigWam, which is turning the world of online recruitment on its head.

Davidson, who is now 54, predicts it will become an £80m turnover business. The mother-of-three is the classic entrepreneur and wants to prove ‘I have more than one in me’.

Lee Collins is 51 and the founder of Rochdale-based Revilo Group, which is using tech in a clever way. Revilo is his eldest son Oliver’s name spelt backwards.

He sold his first car business Hillendale Group in May 2014 at the age of 46 for a sizeable seven-figure sum but his retirement lasted 69 days before the excitement of setting up a new business came calling.

According to the Cambridge Dictionary an entrepreneur is defined as someone “who starts their own business, especially when this involves a new opportunity”.